My Mind Has Twisted Corners 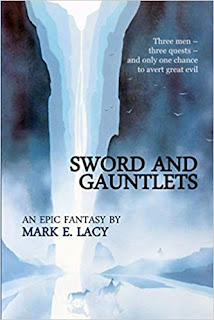 "Your mind has some twisted corners," my aunt told me after reading an epic fantasy novel I wrote and published (recently re-titled and re-released as Sword and Gauntlets). It was an observation, not a criticism. It doesn't take a reader long to come across some of these twisted corners. Early in the novel, the sorcerer Raethir Del fuses a hunter with a deerskin as part of a process of recharging his arcane powers. When one of the protagonists, Enkinor, becomes trapped by Raethir Del in the Dreamtunnel, his initial dreams feel like the most horrible of nightmares. What is the inspiration for those twisted corners? That's hard for me to say. But here are some examples of inspiration for settings and the villain in the novel:
Recently I was surprised to discover my Pinterest account and its contents are still online. I've not used the account for a couple of years because, after the publication of an earlier incarnation of Sword and Gauntlets, I shifted my attention to finishing my books about the American Civil War, as well as my recently released anthology, The Trail Behind Me.

When I was actively building my collection of art and photos in Pinterest, my purpose was to capture images that might inspire my efforts at worldbuilding. Worldbuilding is the term describing how a writer fleshes out an imaginary world. It can include everything from politics, geography, religion, science, sociology, and warfare, to clothing and customs. There is even a magazine devoted to worldbuilding.

I group my images in Pinterest boards with these titles:

Here is a draft of the beginning of a story inspired by a random selection of images from my "storyline triggers," "attire," and "creatures" boards:
A column of knights threads its way through a forest. Afternoon sunlight penetrates the bare woods but does little to lift the mood of the warriors. Shadows fall across their snowy path. One knight has dismounted and leads the others. The sound of their horses is dampened by the snow.
The leading knight, Renault, is intrigued by a black figure he's been watching as they approach. The person stands on the path, clearly waiting for them. As the knights get closer, Renault's keen eyes make out black leather armor, black cape and cowl, a black scarf covering the bottom of the person's face. And a black sword at the stranger's side. Renault is not overly concerned. The black-clad figure is outnumbered. Any sign of hostility on the part of the stranger would be a foolish and fatal mistake. As Renault approaches, he sees the person's eyes and realizes it is a woman who waits for them. Her hand rests on the hilt of her sword. If she is the only one they face, his men need not fear. But Renault has not survived to this age without being cautious.
"Renault!" shouts one of the knights, and points in a different direction. There is a splash of crimson, the color of a winter cardinal. It is another woman, this one mounted, some distance off the path. Her red cloak covers her head. There are no weapons visible. She is not armored but there are large, filigreed shoulder pieces securing her cloak to her shoulders. A long staff with a matching filigreed head is sheathed next to the woman's saddle. Renault is certain she is of high position, maybe even royalty. He looks back to the armored and cowled woman standing in their path, raising his hand to signal his troops to stop.
"There are wolves ahead," says the black-robed woman.
"Thank you for the warning," says Renault. He smiles, gesturing to the men behind him. "We are prepared. Strong bows and sharp arrows will keep them at bay."
"It is not the wolves you should fear. They are being herded this way by something you would be wise to avoid."
If you'd like me to continue this story, leave a comment for me below!
Posted by Mark E. Lacy at 8:00 AM